When You Find Your Tribe 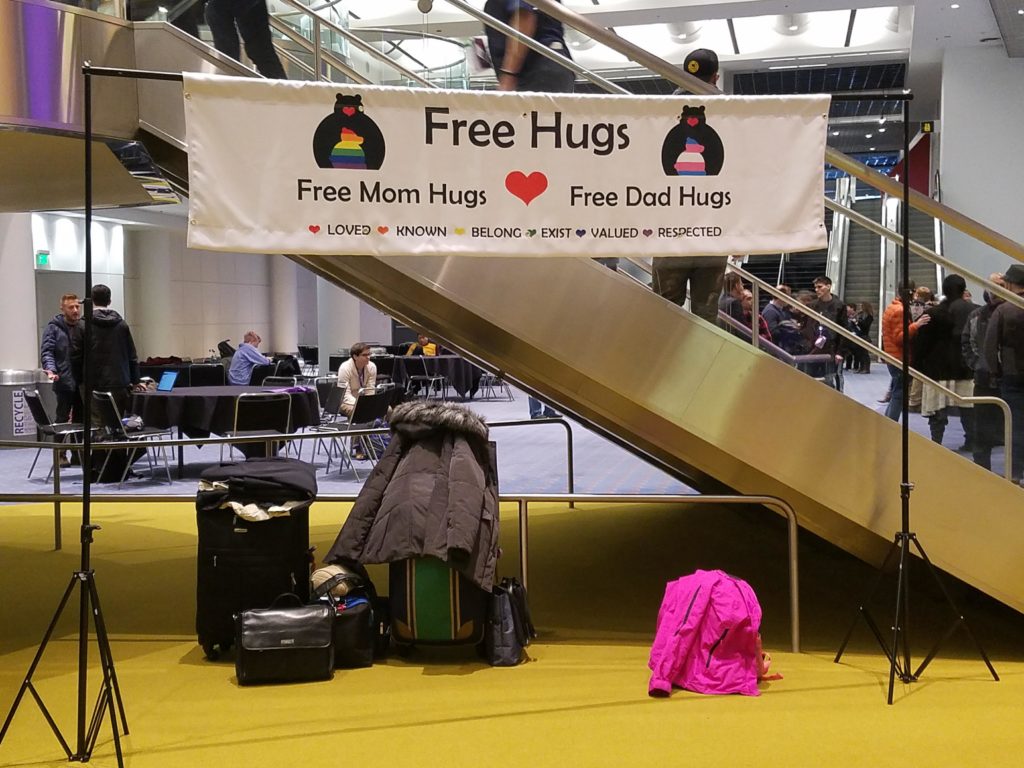 I recently attended a four day conference that I’ve been wanting to go to for three or four years now. It was the annual Queer Christian Fellowship Conference (previously known as the Gay Christian Network) that I have followed on Twitter for a few years, and every year I have been genuinely taken back by all the beauty I would catch a glimpse of via attendees’ tweets.

I originally wanted to attend as an ally, to listen to and learn from the queer community that I might better love and support them. So I was even more anxious to go when I realized I was queer (life’s funny, isn’t it?).

It was an amaaazing trip that I am still processing and will probably be processing for a long time to come. But I will never forget what it was like to walk into an auditorium filled with over a thousand queer people of faith like me.

I have an incredible tribe that’s in my corner, but seeing this large group of people made me feel what I know to be true: I’m not alone. It’s one thing to think that to yourself; it’s another thing entirely to feel that in your bones.

It was the first public space filled with hundreds of people I didn’t know where I didn’t have to worry about the words that came out of my mouth, and I can only begin to tell you how relieving, healing, and life-giving that was.

Before I realized I was queer, I used to think America was pretty progressive in some ways. Whenever I would see a rainbow flag flying high or hear of another queer couple getting married, I would smile and think, “All right, America. You’re doing all right.”

But when I realized I was queer, I began to see things differently. I started viewing the world through a queer lens.

And yes, America has made progress. Yes, there is much to celebrate.

But queerphobia is still very real.

For example, when I bought plane tickets to Denver to attend this queer Christian conference, people would ask me why I was going to Denver.

Which explanation should I give?

This is what I mean when I talk about censoring the words that come out of my mouth.

It’s exhausting*. And yet this is how I operate on a day-to-day basis.

I even get nervous calling John ‘my partner; because, for some reason, ‘partner’ can be a trigger word for queerphobic people, and I don’t have time for queerphobic energy or comments. But I also don’t have time trying to keep people happy. So I’m doing this constant dance of trying to decide how much to say and how much not to say when I’m in conversation with someone I don’t know super well.

So when I showed up to this conference with a thousand other people like me, I was like, “Finally. These people get me. I don’t have to censor my words here.”

Because we all get it.

Here, we’re family.
Here, we understand what it’s like to try to appear as straight as possible for fear of repercussions, and how exhausting and sometimes dangerous that is.
Here, we can talk about, snuggle, and go out with our lovers knowing we won’t get dirty looks.
Here, our tribe has our back.
Here, we’re not alone.
And here, is where you see signs like these:

Hugs for those who’ve been rejected or wounded by their parents; here is where volunteer Moms and Dads stood throughout the entire four day conference in case anyone needed a hug. This, is Kingdom work people.

On the last day of conference, my eyes teared up when I saw this note on the community whiteboard, and I took a picture of it just as momentos. Later that night, however, I learned my flight home was cancelled, and guess who I called? That’s right, Mama Bear. I asked her if I could possibly crash the night at her place, and she immediately and warmly offered a room in her suite that night that she was sharing with her 11yo and 14 yo daughters. It’s moments like these that I found myself thinking, “I have found my tribe.”

And lastly, this photo. This is the tagline of the QCF ministry, and it was like a healing balm to see these words written everywhere and to read those words over and over again. In a world where LGBTQ+ people are continually told they don’t belong and shouldn’t exist, we resist by saying and claiming these words instead:

We exist.
I belong.

*This is my exhaustion as a straight-passing cisgendered woman. Those who are trans*, gender queer, in same-gender relationships, etc, face an entirely different form of exhaustion and stress. Either way, being LGBTQ+ in the U.S. isn’t easy and not always safe and that needs to change.